This facility has not yet been rated.

(View the park reservation calendar below.)

A 3-acre landscaped oasis located in the center of the Uptown business area. This park is dedicated to WWI veterans. The following community funded projects are located in Memorial Park. 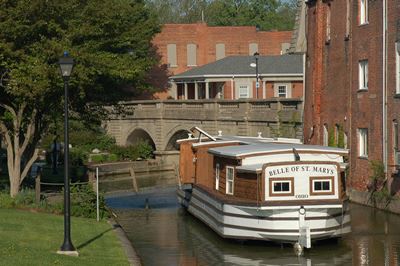 In April 1987, a delegation of St. Marys traveled to our sister city, Hokudan-cho, Japan. This was the first official visit to our sister city and much time and thought was given to the official gift to be presented at that time. It was decided to build a scale model of a canal boat representing our community's early history. The craftsman who built the model was Dale F. Grimes, Sr. After completing the scale model, Mr. Grimes expressed a desire to some day build a full size canal boat.

When Mayor Michael Lynch took office in 1988, he heard of Mr. Grimes' desire to proceed with building a full size canal boat. Mayor Lynch proceeded to contact Mr. Grimes and expressed his enthusiasm to begin the project. Mayor Lynch then contacted organizations and citizens throughout the community seeking funds to support the project. Many companies, organizations, and citizens came forth to support the project financially.

A set of plans was obtained from Hoge Lumber Company. Mr. Russell King, a retired Civil Engineer, came forth and offered his services in revising the plans and working on the project. Dale Grimes, Sr., Master Craftsman, and Russell King worked together throughout the project along with other citizens who donated their time to work on the boat.

The actual construction began in Mr. Grimes' workshop in New Knoxville as he put together ribs for the boat. The preconstruction items were then moved to the BRW Tool and Manufacturing building on Scott Street in St. Marys. This is where the boat was fully constructed. Mr. Ray Barber and the crew at BRW were very helpful throughout the project and donated many hours working on the boat.

A special hot tub was built in which the boards could be heated to a certain temperature and formed or curved as needed to construct the boat. The boat was fully constructed in approximately nine months. On September 19, 1990, the boat was moved out of the building Scott Street. Rollers were placed underneath the boat with a towmotor helping to push the boat out of the building. When the boat reached the end of the graveled parking area on the lot, it was then lifted by one 50 ton and one 45 ton crane and moved farther out of the building so that a flat bed truck could then back underneath the boat. The boat was then gently lowered onto the truck. The expertise of Mid-Am Industrial Corporation of Findlay, Ohio, was greatly appreciated in accomplishing the task of moving the boat from its birthing place on Scott Street to its resting place in the Miami and Erie Canal in Memorial Park.

Moving day for the boat was September 2, 1990. The crew started at 9:00 a.m. from the Scott Street location. Many school children and citizens were lining the streets to observe history being made in our community as the "Belle of St. Marys" was transported to the canal. The boat traveled south on Scott Street, making a turn onto Spring Street, which was the only turn in the moving route. The move went very smoothly and the boat was in the Uptown area by 9:45 a.m. The longest wait for spectators was while Mid-Am Industrial positioned the straps which cradled the boat so the two cranes could carefully raise the boat over the bridge and down into the canal. The process of actually placing the boat in the canal took only about 10-15 minutes. City crews were waiting on the canal bank to assist with positioning the boat as it was lowered and pulling it by ropes into its docking place.

Like many other structures exposed to the water, the canal boat deteriorated over the years and was lifted from the canal in 2001. A new boat was built by City personnel using only a few pieces of the original boat. The reconstructed vessel was placed on a permanent concrete cradle structure in the canal in 2002. 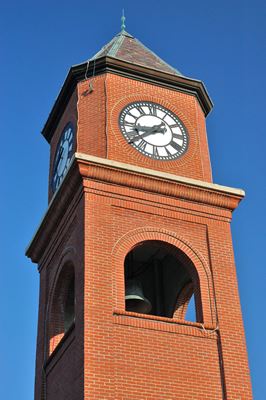 In 1988, AAP St. Marys Corp. built a new manufacturing facility in St. Marys. The company wanted to show their appreciation to the St. Marys community for the kind assistance AAP received while locating their company here. When AAP heard of the Clock Tower Project, they donated the structure to house the bell and clock. The electronics were donated by Miss Marguerite Geiger, former principal of West Elementary School.

In January 1992, the St. Marys Area Chamber of Commerce formed the Memorial Covered Bridge Committee. The project began under the direction of former Mayor Michael Lynch and was completed under the endorsement of Mayor William Sell. 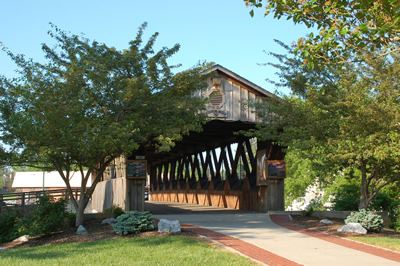 This community project was the result of $85,000 of cash donations and $60,000 of material donations and discounts. The project construction was headed by Foreman Dale F. Grimes, Sr., Foreman/Assistant James Kite, and well over 5,000 volunteer man hours.

The roof of the bridge is a result of donated lumber from North Carolina. It started with a drought and ended with a hurricane. The result has been a relationship of giving between families in the New Knoxville area and North Carolina. Several years ago farmers in the drought devastated Carolina foothills put out a call for help through the United Church of Christ, and farmers in New Knoxville responded with truckloads of hay and cash for grain. Since that first act of caring, the two groups have paid each other back in many ways, all the while developing a unique friendship. When Hurricane Hugo smashed into Charleston, South Carolina and then traveled into North Carolina, it left in its path hundreds of fallen trees. Among the trees were several large White Oaks, and knowing that Dale Grimes, Sr., was interested in building a replica covered bridge, the North Carolinians decided to contribute some shingles. An old-fashioned shingle cutting machine was found and cutting began. Over 16,000 shingles later, the task was complete. Several of the North Carolina residents made a trip to St. Marys for the ground breaking ceremonies. The shingles add a very authentic look to the bridge and seal up nicely during a rain. 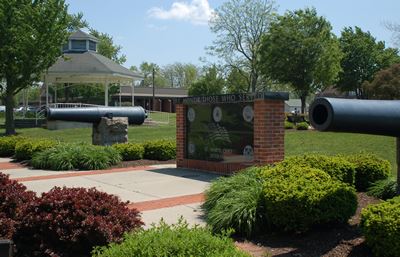 Another project associated with the Memorial Covered Bridge was the "Veteran's Memorial Walkway", which was constructed in the Summer of 1993. This walkway leads to the opening of the Memorial Covered Bridge. The cement walkway is lined with 600 red bricks on each side and each brick is engraved in the honor of an area resident who has served in our armed forces. Individuals purchased the bricks and supplied the information to be engraved. Unique Awards and Signs of St. Marys handled all the engraving services.

In 1994 the "Grotto", a stone recess in the banks of the St. Marys River on the Memorial Park side, received a face lift. Old stones were removed and the Grotto was rebuilt as close as possible to the original structure. The Grotto has been outfitted with a circulating waterfall and collection pool. The waterfall and the wall in each side of the Grotto is lighted. This project was made possible by the labor of local businessmen and funded by Setex, Inc.

It is unclear as to why the Grotto was located here. Local historians have not been able to find any history on the Grotto. One belief is the Grotto was used as a spillway to lower the water level of the canal between Lock 12 and Lock 13, but there are no records to verify this theory. 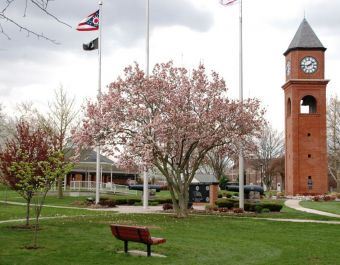 Spearheaded by Mayor Freewalt, another Veteran's walkway was located around the three new flag poles that were installed in 2000. A monument engraved "We Honor Those Who Served" and engraved with each emblem of our armed forces stands in front of the flag poles. The concrete walkway around the flag poles and monument will hold an additional 400+ bricks to be engraved with the names of area residents who have served in our armed forces.

A monument commemorating the Ohio Army National Guard was constructed and dedicated in 2022 to memorialize the Guards extraordinary service and historic 143 year presence in St. Marys.  The structure is located on the south end of the park near the original 1920 Armory.  The construction was funded by the City and through private donations and was constructed through a partnership between local contractors and City employees.  The design was inspired by the “Castle Architecture” commonly found in Armories throughout Ohio.  The two cannons at the front of the monument represent the two Patriot naval guns which once stood guard at the entrance. The cannons were made by Gilmore Ordnance of Old Fort, Ohio. 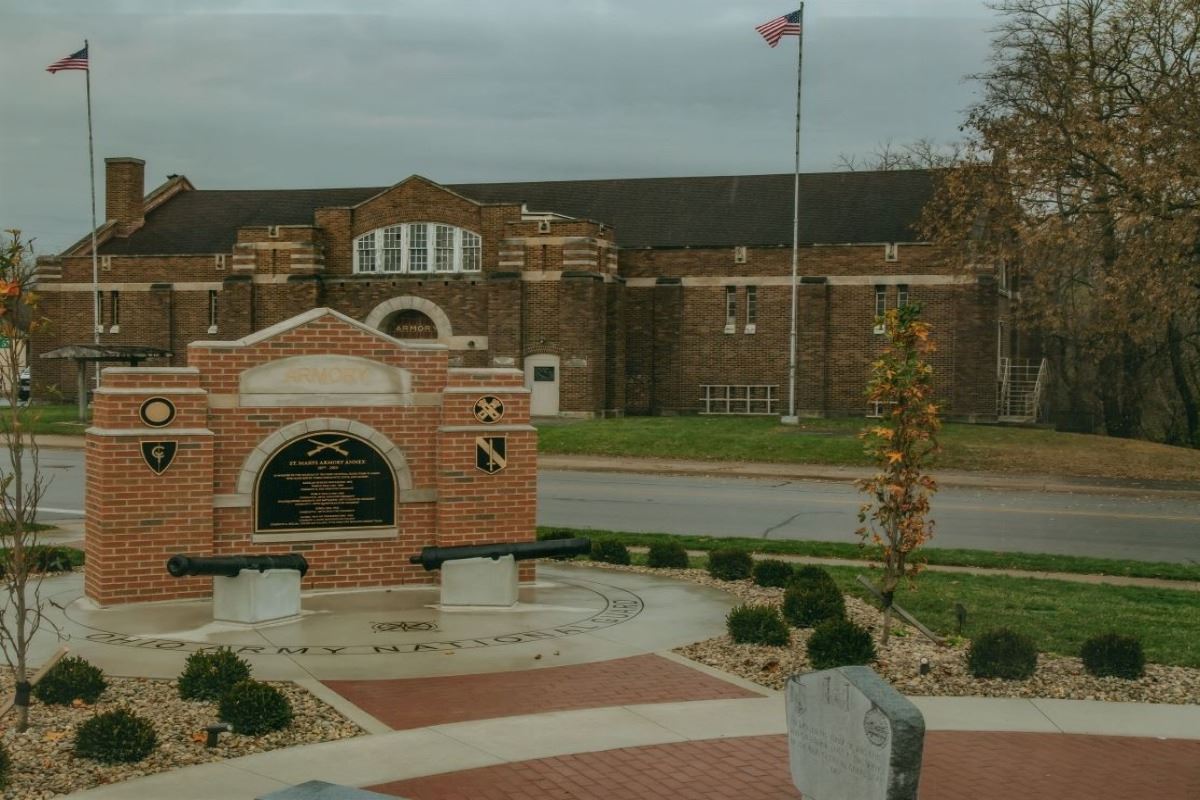 To Reserve Use of Memorial Park

To reserve use of Memorial Park for a special event, you must complete an Application for Use of City Park/Facility form and submit to the office of the Director of Public Service and Safety for approval.  A non-refundable fee of $40.00 is required and must be paid prior to the event date at the Municipal Building, 101 E. Spring Street.  Although the park can be reserved, it is still a public park.

To fill out a park reservation online, click the Request Reservation button below or the Reservations
button on the home page. The application form can also be obtained at the Municipal Building.